(2.ii) How To Communicate With Your Subconscious

Whether speaking to yourself or others, what you are saying is much, much more than words.

The words you use help communicate new beliefs and re-confirm old beliefs to your subconscious mind.


Have you ever caught yourself speaking and realize immediately you sound just like one of your parents?

It is more than words you are speaking - it is your beliefs formed in the early child development years, as explained in the Step Two Introduction

Your parents passed on their beliefs to you; which have now become your beliefs.

Also I previously explained in the section Breaking the Habit of Failure how new neurode patterns are formed through repetition. The neurode patterns that are used the most have the largest number of connections, fire the easiest and become relied on the most. Essentially, they become your beliefs.

The above is a list of more than words; it is negative programming, self-limiting and self-sabotaging beliefs.

Do you understand when you use negative self-talk it is much more than words?

Is it any wonder you are stuck and can't seem to achieve your dreams with constant negative communication to your subconscious?

There has been a great deal of discussion both for and against the value of a positive affirmation. I believe affirmations are extremely valuable (so valuable in fact I will discuss in detail later) and all anyone has to do is look at how their own negative self-talk has been attracting negativity.

Words are so powerful and have such a profound effect on us all. Have you ever bumped into a friend and were happy to see them, when out of their mouth comes something like “are you okay, you don’t look well” (or something of this nature) and all of sudden you begin to feel ill.

You were feeling fine until someone said you looked ill.

They spoke more than words; they planted a seed. You think about their comment which creates an emotional reaction. The more you focus on the words spoken, the more you communicate with your subconscious the belief you are ill.

The non-conscious area of your brain does not distinguish between good and bad or right and wrong – it is merely your slave giving you whatever you are focusing on.

It is also important to understand the subconscious does not distinguish between negative and positive. Therefore, when you focus on what you don’t want, you are effectively sending a message to the non-conscious brain to provide whatever it is you don’t want.

There is a Chinese proverb that explains this quite eloquently: 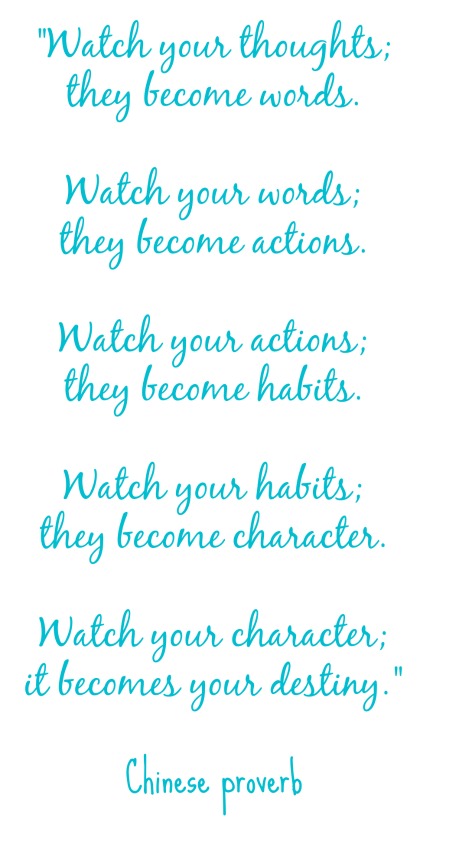 By now, if you have been following this free tutorial from the beginning, hopefully you understand:

You are the only one who is totally responsible for where you are today.

In the previous section I explained how critical thinking was detrimental to success. I also explained how to change the direction of your mind by choosing empowering thoughts.

The same thing applies to words. You can change the messages you are sending to your subconscious by choosing to use “flip words”.

Flip words are simply taking something negative and flipping the words around to make a positive affirmation or positive statement.

For example, instead of saying “I can’t afford to buy this…..” you could flip your words around to make a statement such as “I choose not to buy this ….. right now”.

The first statement tells your subconscious you are focusing on lack of money and will therefore attract more lack.

The second statement tells the subconscious you simply choose not to buy "X" right now and it makes no judgment as to why.

As the Chinese proverb states - watch you words!

Has this section helped you to understand the words you use have a much greater impact on the subconscious than most people realize?

Hopefully you now see what you speak is more than words; you are exposing your beliefs - whether you want them or not.

Okay, so far in Step Two, we have discussed how your thoughts and words create your reality.

In the next part you will learn the power of your sixth sense - intuition. You will also discover how to tap into Universal Intelligence.